I am the maintainer of a somewhat popular open source email app for Android, called K-9 Mail. We use GitHub to host the app’s source code and use its issue tracker to manage bug reports and feature requests.
Lately, I’ve found myself hiding issue comments more and more. Sooner or later someone will ask “why?”. And now I can point them to this blog post 😀

If you didn’t know that team members can hide comments, this is what it looks like: 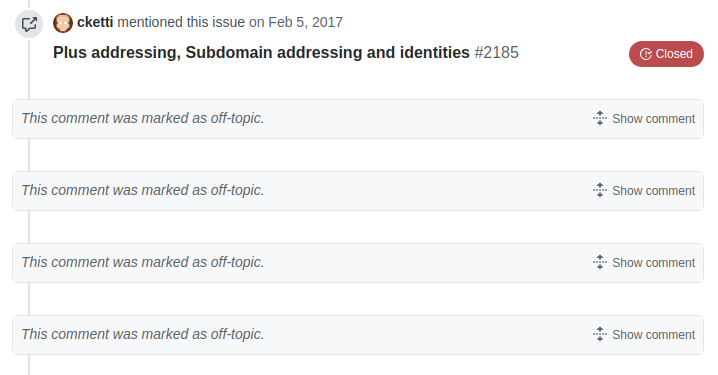 There are all kinds of issue comments that I hide:

All of these have one thing in common. For the developer who ends up implementing the feature or fixing the bug these comments don’t add any useful information.

Especially issues for feature requests can remain open for years. When I go back to the issue page I don’t want to read through those unhelpful comments again (and again, and again). So that’s why I hide them.

I’d love to learn how other open source maintainers deal with such comments. Let me know on Mastodon or Twitter.